Aspie Round the World

Since I started writing this blog late last year, I have been completely fascinated by the blog stats, and in particular the more recently added world map.  I love the way the countries get coloured in, I long for extra bits of my map to light up, and I can’t help but keep hitting that refresh button!  It has become a proper Aspie obsession.

I really want to reach as many countries as I can, which according to Slices of Life is 257 (although WordPress may not count them in the same way).  In order to achieve my dream, I would like to ask you to help me.  I only need one person in each country to look at a single page of my blog, and when I think of it like that, it feels feasible.

So if you know someone in one of my currently unreached countries who might appreciate my blog, please consider forwarding it to them.  I’m sorry that I don’t speak any other languages, which may reduce my accessibility and relevance, but if you can think of just one person I would be eternally grateful.  I will post my updates and the latest map and total here, newest at the top.  Here’s to sending an Aspie round the world! 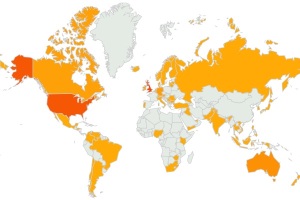 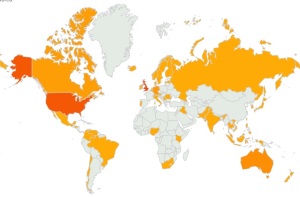 6 Responses to Aspie Round the World